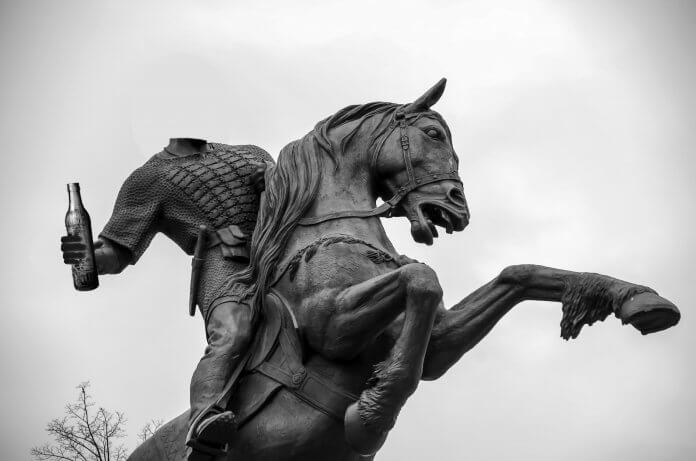 Hi! Barney Bayless here! As most of you know, I’ve been running my blog [www.headlessdistiller] for three years now. For those not yet up to speed, I started as a hip hop-head in craft beer and natural wine, then cognisized that the world of spirits was SO far behind the exciting things which were happening there and in wine.

It’s a view that became clarified in my mind when I tried a particularly potent distillate of fly agaric made for me by a Monseigneur Culpepper of Hackney.

Why are spirits so far behind?? I asked myself. Aren’t they a pure alchemical transfiguration of the base into the sublime? Liquid gnostic wisdom?

They sit out there – potent distillates of truth and essence.

Drinking one should be to indulge in a Crowleyan ritual, to summon the ancients, to understand the mysteries. They are rooted.

Or they should be…

Pour any of those brands that festoon the shelves and back bars and do you get that? NO. Unless it’s mezcal. Or Clairins.

So I began to write, find the like-minded, the ignored. What can I say? It’s been quite a success.

Inevitably there have been naysayers. What does someone with an art history degree know about the science of distillation, they say? I reject that frankly negative position. The Newtonian approach has failed.

All hail Y-Worth the Dutch alchemist who split with Isaac, leaving him earthbound. Praise be to Rhazes, the Persian master of the fumey interactions of al-embic al-kohl. Did these sages of the past know chemistry? I think not!

From being on the fringes I’ve now realised that there needs to be some way for fellow acolytes to access the real spirits – the drinqz – which do exist. Hence my new firm Liminal Liquors, which will, in time, amass an extraordinary collection of spirits of marginal interest.

These will be my accounts of setting up my firm. A light shone into the margins catching the glittering eye of the lost distiller. It will change the way people see spirits.

Why now? I don’t know about you, but I think that this lockdown has been AMAZING. #positivity #dontlockdownlookup

Just listen to the birds, look at the flowers, see how nature is taking over our parks and streets. I kind of think that this is just the manifestation of everything I have been writing about in my blog.

Has the earth ever been more fecund?

Has there ever been such possibility?

Now is the time to create more conscious drinks which relate to the earth. Spirits that are natural, that put us in touch with the earth that we walk on.

Spirits that are spiritual.

Join my gang as we go on this quest to the extremes to recalibrate the tilted world of ardent liquids.

Three words. THIS WILL BE INCREDIBLE GUYS!

The Botulist: how to match wine and tripe