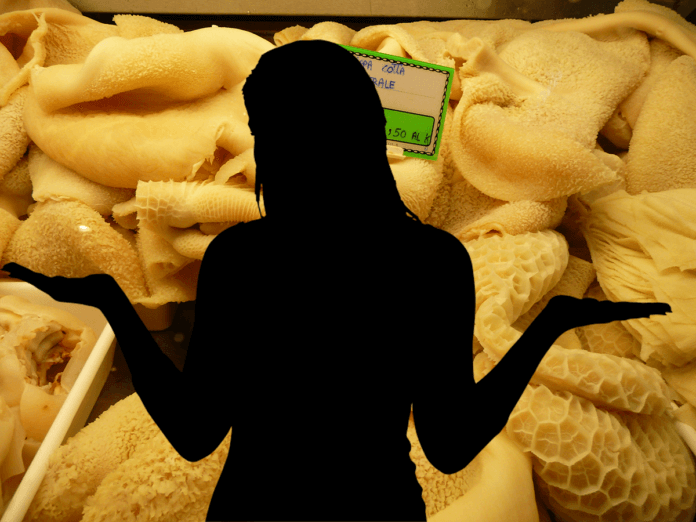 With World Tripe Day just around the corner (really… it’s on Monday) our gonzo food and wine-matcher takes on the challenge of matching wine to rancid stomach lining.

I swore an oath to myself when I set out on my food and wine matching career that there would be no chicken too chlorinated, no eel too slippery, and no offal too awful to be included in my reviews.

So I was looking forward to acquainting myself with tripe. Odious and unattractive this meat by-product might be, but it is actually considered a delicacy by… well, no-one.

Needless to say, I was up for the challenge of writing an inspiring piece that would change the way we think about bovine stomach linings. I had received a flyer in the post about a tripe tasting hosted by a local supplier, so I decided to attend.

Perhaps I should have been suspicious that the tasting was held in a venue called The Good Boy Canine Supplies Barn, or that the flyer boasted ‘Free sample of Oinker’s Pigs’ Ears on presentation of this leaflet’, but it wasn’t until I was seated on the floor next to a group of bearded collies that I began to suspect something was amiss.

And that’s when I realised there were no wine glasses, only water bowls.  Tasting tripe unaccompanied by wine seemed like an unnecessarily cruel thing to do to oneself, so I stuffed the free pigs’ ears into my handbag for the journey home and left.

I had heard about a local bar called The Fourth Stomach, whose only TripAdviser review described it as ‘a truly offal experience from start to finish’.  Previous ventures by the same investor known respectively as ‘The First Stomach’, ‘The Second Stomach’ and so on, had all failed.  Nonetheless, as he showed me to my table, manager Al Ucaneat, told me that he had high hopes for his new upmarket venue and was hoping for a Michelin Shart.

Like many fine dining restaurants, The Fourth Stomach does not have a menu.  Instead, the waiter informed me that the dish of the day was, unsurprisingly, tripe.

‘How is it served?’ I enquired.

‘Tripe is as tripe does,’ he replied, enigmatically.  I reached for the wine list, selected a few, and also ordered a couple of Jäger Bombs, so I could sharpen up my palate before the tripe arrived.

After a short wait, I was presented with the dish of the day, ‘Reticulum Maryland’.  As this was an unconventional spin on the classic Chicken dish, I reached for a white Rhone blend featuring Marsanne and Roussanne, wondering if its gentle notes of honeysuckle over delicate vanilla oak could stand up to it.

Sadly, they could not.  The tripe retaliated like a rampaging bison, trampling the honeysuckle and then smearing a rancid cowpat over the delicate vanilla oak.

One of the few articles I’ve read about matching tripe with wine suggested that you should ‘think about confronting the tripe, rather than trying to seduce it.’  With this in mind, I reached for a muscular Californian Cabernet Sauvignon.

Initially, I thought the pairing had potential, but it wasn’t long before the tripe launched a blistering attack on the wine, tearing apart its impeccably crafted layers of cedar and blackcurrants, and reducing it to more of a cowering blackcurrant jelly skewered with great hulking chunks of angry tripe.

Running out of ideas, I scoured the wine list again and asked the waiter to bring me a bottle of Banyuls.  Whereas the Cabernet had confronted the tripe, realised its mistake, and retreated, it was my hope that this beefy beast from the South of France would confront the tripe, scare the living crap out of it, and send it shuffling back to the abattoir.

I was partially right. A confrontation did occur, and the tripe retreated briefly. But rather than skulking off to the abattoir, it hid around the corner and waited for the Banyuls to emerge, before beating it with a crowbar.

The interplay was quite fascinating, and I found that the more Banyuls I drank, the more it stood up to the crowbar thrashing.  After a while the tripe started to taste slightly less offensive.  The battle in my mouth continued until eventually myself, the tripe and the Banyuls decided enough was enough, and passed out on the table together.

Gently prodding me awake, the waiter enquired if I wanted dessert, but the dish of the day ‘Sticky Offal Pudding’ didn’t inspire me at all, so I decided to call it a day.

If you are contemplating eating tripe, before you even start pondering what wine to pair it with, you have already proved yourself braver than most, so my advice is to be bold, persist, and get ready for battle.

Click here to learn how to match wine with chlorinated chicken; and here to learn why food-flavoured drinks are essentially evil.

Hector Lannible: How to make the most of NOB wines