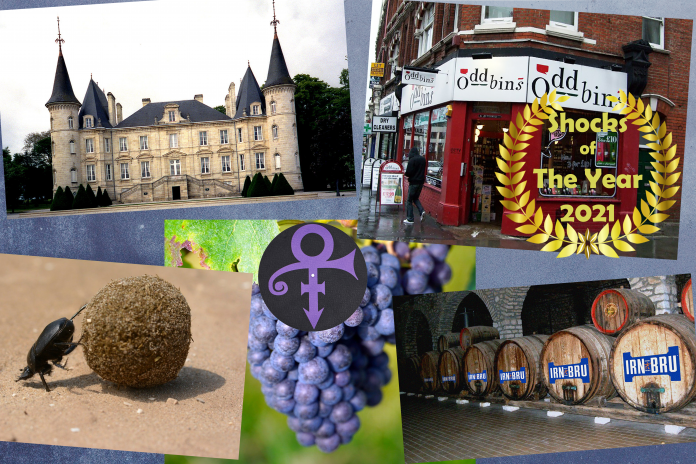 Here we are again, celebrating Fake Booze’s first calendar year of churning out sarcastic nonsense, with the second of our six Awards of the Year. And after opening with our Launches of 2021 yesterday, this time we’re looking at the Shocks of the Year.

Yes – the stories that were even more surprising than the rest of the completely made up shizzle on Fake Booze.

In the true spirit of satirical contrarianism, however, we’ve also included in this category the stories that were Not A Shock At All. The ones that were so not-shocking-in-any-shape-or-form that they could have been true.

The revelation that drinks retailer Oddbins isn’t dead yet caught many of you by surprise. In fact, some of you questioned whether it had ever been alive in the first place. We can confirm that it has and it is. But only just. Undercover journalism at its finest.

Most definitely our ‘soft drinks story of the year’ (admittedly from a short list of about two) is the stunning news that luminous orange sugar-bomb Irn Bru is to get its own AOC. Inspired by a pic on social meeju of Alexandria Ocasio-Cortez (AOC) drinking a glass at COP 21 (see it on our Gifarium here), it’s proof of art imitating life. Or something.

Another big celebrity in the world of drinks, grape variety Pinot Meunier, [are you sure about this? Ed] announced that it was changing its name for artistic reasons as it launched its solo career. Definitely one of the shocks of the year – especially for Chardonnay and Pinot.

And now, how about a series of ‘non-shock’ stories. Essentially, anything to do with Bordeaux, which, year after year, is as reliably self-absorbed and pompous as Donald Trump.

Firstly, there was the news that the region had had its best en primeur campaign for a very long time. Huge story – and not one we’d ever seen before.

Then there was the non-shock that the 2020’s were proving to be a vintage year in terms of quality. At least for journalism.

And finally there was the total non-story that one rich family had sold a big house for a lot of money to another rich bloke. Literally, across the wine world, not one shit was given.

Our final ‘like this even a story’ revelation came with some brilliant investigative work, revealing that all drinks writing is officially crap. We know this is true because the people who told us were the same ones who were doing the writing. Go figure.

If you’re enjoying our Shocks of the Year – in fact, our 2021 round-up in general, please think about supporting us on Patreon. Apart from the kind support of the Craftwork spirits guys, we rely entirely on you guys’ goodwill to keep this repository of sarcasm going.

It’s really cheap – and ask yourself, has anything else made you laugh this much in 20 bloody 21? (Don’t answer that…)