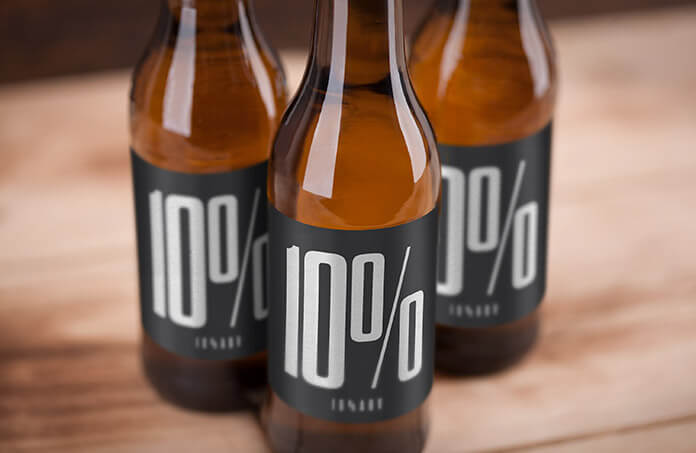 A new microbrewery in the South West has caused outrage by displaying nothing but the beer’s alcohol content in colossal lettering on the front of the bottle.

Health groups have lambasted the abv-centric packaging for encouraging a negative relationship with alcohol. But the Craft Beer and Brewers Consortium (CBBC) has criticised the release, too, saying that eyeball-scrambling psychedelic branding is the ‘unwritten rule’ of the category.

The brews are the brainchild of former PR and Marketing Executive, Mark Le Houblon. The founder of ‘Abv Brews’ moved out of London to the West Country in search of a simpler life two years ago.

‘To be honest, I wasn’t sure what to expect when I came here looking for a cottage industry to exploit,’ he told Fake Booze. ‘But I was delighted to find that this area is teeming with people who have all done exactly the same!’

After initially considering a pottery workshop and llama farm, Le Houblon settled on beer because he ‘liked drinking it’. He now describes himself as a ‘fully committed hop-portunist’.

‘I figured that if I came up with a slightly violent or rude name like Cranium Smasher or Cardinal’s Dangler and got my mates drinking it, I would be a millionaire before the year was out,’ he said.

But a series of focus groups and blind tastings with beer lovers forced a controversial change in direction.

‘To be honest, after a few of them had muttered ‘mmm… hoppy….’ the rest of the 90 minutes was just taken up with them just trying to guess the alcoholic content. So I thought, well if that’s all that matters, why not make that the primary focus of the label?’ he told Fake Booze.

Ever alert to a PR opportunity, the brewer has contacted singer Meghan Trainor to record a reworking of her hit song in his barn.

‘It’s called “All about that booze [no trouble]”,’ said Le Houblon, ‘I can see it being huge at Christmas.’

Despite being offered ’48 free cans for her help’ the singer is yet to respond to the request.

Celebrity backing or not, Le Houblon’s ‘booze only’ labelling system has certainly struck the right note with retailers. The inaugural release ‘10%’ is already flying off the shelves of independent merchants up and down the country and the eagerly anticipated ‘8%’ was launched last week.