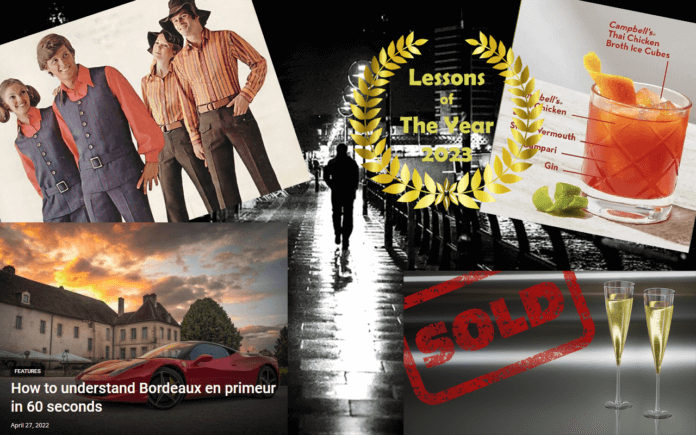 There are three things that the drinks world loves: free samples, pointless tastings and Learning Stuff.

The first two, you could argue, are the day job. But – somewhat astonishingly – there is no shortage of people who are happy to give up their free time ploughing through vast, unreadable tomes written by 19th century label-strokers, or enrolling for hours of tuition to learn about German labelling laws.

Frankly, now that Fake Booze is here, we think you should save yourselves the effort.

Why bother studying for an MW or re-reading 17 volumes of Sir Lunchalot O’Bore’s Wine Compendium when you can just visit our website a couple of times a week to be better informed than the next guy. Or, at least, less boring*.

*Fake Booze can not guarantee to make you interesting. And if the ‘next guy’ is Dave Broom or Jancis Robinson, you probably won’t be better informed than them either. But we have to come up with some reason for you to read this stuff. That said, since you probably don’t pay for it, we don’t owe you anything, frankly…

English Sparkling wine is hot, hot, hot at the moment, so no surprise that the Germans wanted in on it, setting out bold aspirations to make the industry almost as good as sekt.

If you’re feeling a little queasy at the thought of German sparkling wine, then maybe skip the story about the big upcoming trend of ‘brothtails‘. Astonishingly based on a real story, we’re not sure that this trend ever quite hit the peaks its creators expected.

The real battle for supremacy was clearly happening elsewhere. Specifically in a four-way slug-fest between perpetual ‘next-big-thing’ers Riesling, sherry, shochu and marsala. Like a cage-fight between velour and corduroy, with perhaps the most popular illustration of the year.

In further ‘key lessons of the year’ the Brits discovered that their fizz was the best in the world, having massively outperformed Champagne in a blind tasting. Though admittedly it probably helped that the latter weren’t allowed to enter.

Meanwhile, MW students the world over were digesting the shock revelation that several years of isolation and bankruptcy to get two letters after their name wouldn’t turn them into a sex magnet.

Though for anyone who still thinks this represents a desirable life goal, we did manage to gain access to the ten most popular MW exam answers.

And our ‘Understanding Bordeaux en primeur in 60 seconds‘ crib sheet should tell you pretty much everything you need to know about the region where tweed is part of the terroir.

And if you’ve enjoyed any or all of the above, please think about supporting us. There are links all over the place for regular payments and one-off donations, so, you know, do the decent thing…