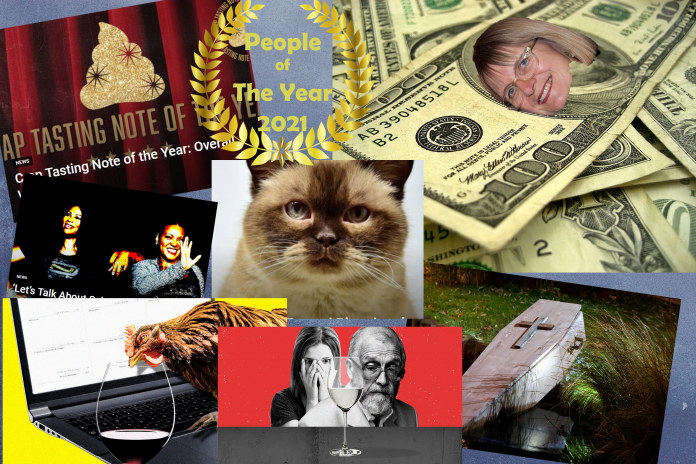 Everyone likes to say that the world of drinks is a people industry. This is bollocks. People just get in the way, frankly – usually spoiling a perfectly good drink by drivelling on about hopping levels or oak. But they are, at least, entertaining – sometimes intentionally so – so we thought we needed a People of the Year award.

Below are the personality-driven stories that most entertained us and you over 2021.

Winner: Person of the Year

Our single biggest personality story of the year was the news that Jancis Robinson had been handed several wheelbarrowload’s full of cash for her website. The drinks world united to praise her through gritted teeth, wondering what she had that they didn’t, apart from talent, experience and several decades of gimlet-eyed hard work…

That thing we said about people getting in the way and ruining perfectly good drinks? Never is it more obvious than in our Crap Tasting Note of the Year awards. Our first year of the ‘Crappies’ brought stellar winners in every category, from Most Sexist Note of the Year to Most Pretentious, They Said What? and Fruit Salad Note of the Year.

But our overall Crap Tasting Note of the Year was a doozie. If you have seen anything comparable that you’d like to send in for 2022, send it in (anonymously) to [email protected]

While some fine undercover reporting by our team in the US blew the lid off the shocking battery tasting farms of uber critic James Suckling.

And who could forget that this was also the year when Pernod Ricard accidentally replaced its CEO with a cat.

The last 12 months have seen a frankly demoralising number of celebs crawling out of the woodwork – but rather than include them in People of the Year they’ll be featuring in our final category – Bastards of the Year tomorrow. Because we think they should bugger off and stick to whatever the hell their day job is.

This was the year when one of the most well-loved members of the wine world, Stephen Spurrier, poured his last glass. We wrote what we still maintain is a warmly amusing tribute. Some of you didn’t like it, so skip this if the idea of it bothers you.

It was also the year when the term icon was finally rendered utterly meaningless and Tim Martin, the spam faced pro-Brexiteering boss of a pub group died of an overdose of irony. In our world, at least.

If this penultimate roundup of the year just gone is making you smile, please think about becoming a Fake Booze supporter via our Patreon page. It would mean a lot to us – and our children, who we will be able to feed rather than sending out to shoplift for snacks.