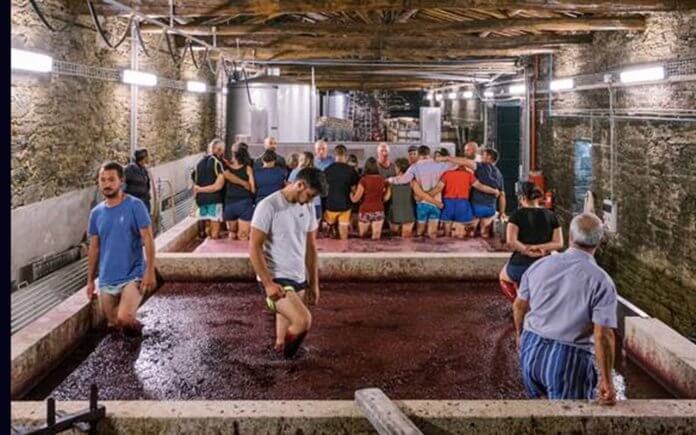 Wineries across the northern hemisphere are being accused of exploiting innocent members of the public by getting them to work for free.

According to Vin-Nesty International, winery ‘vineyard experiences’ might promise the public the chance to ‘spend a day as a real vigneron’ but are often little more than slave labour.

‘Basically they spend 12 hours in the boiling sun picking grapes for free,’ said Woke Persson of Vin-nasty International. ‘It’s even less profitable than running an actual winery – though admittedly there’s not much in it.’

Rates and experiences can vary significantly. At the bottom end, a La Manchan co-op is offering bottling-line junkies the chance to watch 20,000 cases of Airen being prepped for the German market for free.

By contrast, €100 gets devotees of old-school wine the opportunity to spend the day staring at a horse’s arse while they manually plough furrows in the Loire.

Participants get to keep any of the animal’s dung which is said to be largely indistinguishable in aroma from the wine itself.

The most expensive fieldwork experience is at Screaming Beagle in California. Punters pay $250 for a day in amongst the Cabernet, though this does include a slice of flavourless artisanal cheese for lunch, a ‘shareable’ 20-second reel of live picking and a guaranteed score of at least 98 points from James Suckling.

While human rights groups have questioned the ethicality of charging people to do work, Pierre Cachinne of Domaine Sans-Morales in Bordeaux said his business now relied on these paying workers.

‘We can’t find experienced pickers anywhere,’ he told Fake Booze. ‘But there’s a huge pool of people who are desperate for timeless authentic experiences that connect them with the rhythms of their ancestors.

Cachinne said that he ‘earned more from having a coach-load of Swedes working in the vines at €50 a pop than from selling my entire year’s production to Lidl.’

Vin-Nesty International says that journalists, bloggers and influencers have been particularly at risk.

‘Most of them would drop everything to attend the opening of a door,’ said Woke Persson. ‘So they’re guaranteed to work for nothing if there’s a bit of sunshine and free food and drink.

‘Even if the food is salt cod.’

The Union of Drinks Journalists backed this up, saying that an estimated 80% of its members were currently foot-treading grapes in the Douro. Something which, they said, ‘made their social media posts even more irritating than usual.’

Human rights groups, however, are adamant that things have to change.

‘We can’t have these poor people toiling away for hours on end, with nothing profitable to show at the end of it.

‘And things are pretty bad for the pickers as well.’