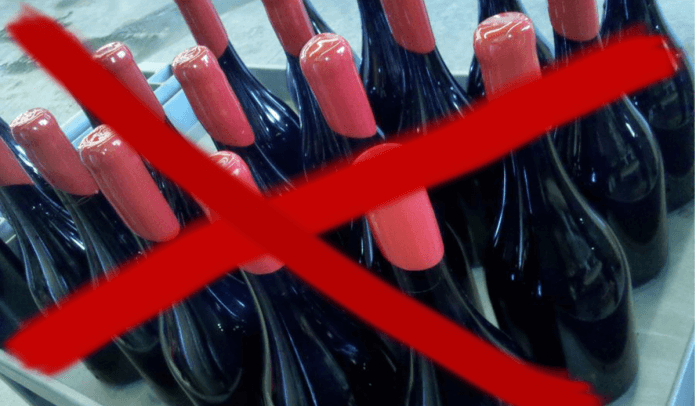 The trend for bottle waxing is dangerous, narcissistic and sends unrealistic messages to young people, according to a packaging pressure group.

Harry Balzac of the Whacks-On/Wax-Off group says that the removal of foil has become a ‘huge trend’.

‘Everywhere you look on retailers’ shelves there’s a shiny baldness,’ he told Fake Booze.  ‘It’s as smooth as an advert for Bacardi – and about as desirable.’

Balzac says there are increasing examples of ‘bottle shaming’ and ‘beer pressure’ , with young brands feeling pushed into undergoing expensive and often painful waxing procedures just to ‘fit in’.

‘Waxing might look good,’ he told Fake Booze, ‘but brands need to understand that it is expensive and dangerous to apply and often painful to remove.’

Many customers, he said, spoke of experiencing a ‘massive pain in the arse’ when trying to extract a cork sealed under wax.

As a result, what used to be a process limited to hardcore Jura and Bourbon producers is now increasingly common.

‘Bottles are under pressure to look a certain way,’ said Vrie. ‘They think a mass of dark foil is ugly.’

Common styles include the Brazilian – fully-waxed; Italian – waxed, apart from a thin DOC stamp, and Californian which is largely natural, but with a thin waxed plug on the top to ‘tidy things up’ for summer.

Some big-name bag in box wines have even been running wax round their bung holes in a procedure known as ‘Bag, sag and clag’.

Herr Vrie told Fake Booze it was ‘almost as painful as drinking the contents.’

Natural wine producers have got behind Whacks-On/Wax-Off’s message.

‘These young impressionable brands need to worry less about their look and talk more about all the good things that they have on the inside,’ said Ari Moeuf of Bughuggers Anonymous.