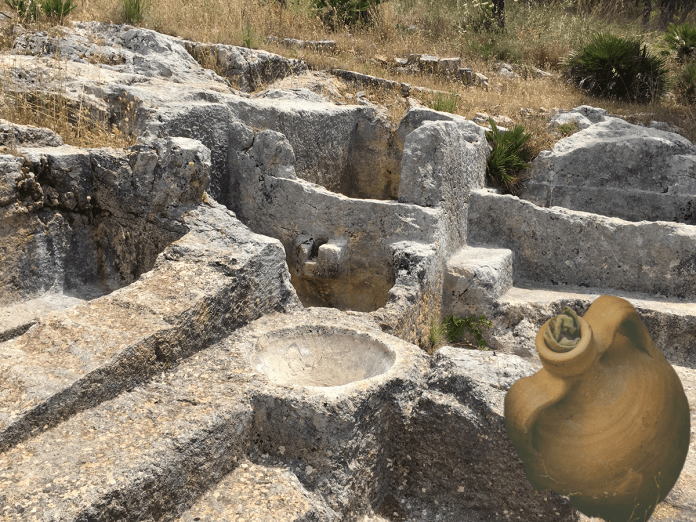 Big producers have apparently been ‘killing wine’ for much longer than previously thought, according to archaelogists in the Middle East.

A team of dust-fondlers recently unearthed the remains of a 1500 year old wine-making complex at Eejay Galil in Israel.

‘It could knock out 2m litres of wine annually, which, to put it in context, is probably about as much as France is going to manage this year.’

But subsequent excavations, brought to the attention of Fake Booze, have revealed a stone coffer full of papyrus correspondence. This shows that, as well as being highly successful, the ‘wine factory’ was also highly controversial.

While some locals appreciated the way that Eejay Galil ‘made wine accessible through clear branding and varietal labelling’, others felt that it was ‘dumbing down an artistic product’ and ‘taking away the romance.’

‘There’s just no way the winemaker can stomp all those grapes themself,’ said one. ‘And without that I don’t think it is an authentic expression of terroir.

‘They’re killing the soul of wine.’

Some critics believe that a similar argument is still used by many European producers today.

The winery’s biggest seller appears to have been its Barf-It range, sweetened with honey and flavoured with herbs.

The 512CE vintage picked up the trophy for ‘Best Ashkalon Red Under 12 Shekels Made With Oregano’ at the Decathlon World Wine Awards, which featured entries from as many as three countries.

Judges praised it for its ‘raging sugar content and unnatural flavours’.

Some critics believe this is still used as a stylistic template by many Californian producers today.

The end of artistry

Barf-It’s success, however, was not without controversy, as the scrolls reveal.

‘Using all these modern techniques like stone troughs and amphorae is the beginning of the end,’ wrote one small producer. ‘Wine should be riddled with faults and full of twigs and bits of moss.

‘It might not be clean – or even drinkable. But it’s authentic, and that’s far more important.’

Some observers believe this thinking is still used as a template by many natural wine producers today.

There was concern, too, about the Galil factory’s growing dominance in the market.

‘These things are in every stall in every bazaar from Judah to Jaffa,’ complained one local wine merchant.

‘But wine is a complex product, and most of the people drinking it won’t know anything about the Ashkelon and Gaza appellation.

‘It’s essential that we carry out a worthy but dull programme of consumer education so that they do – and maybe throw in a couple of layers of esoteric classification while we’re at it.’

Some observers believe this thinking is still used as a template by pretty much the entire wine world today.

‘Clearly, this was a very successful and sophisticated operation by ancient standards,’ said Ms Trowel.

‘In fact, to be honest, in terms of its production and marketing it’s probably better than most Spanish wineries.’

However, she said that initial plans to turn the archaeological site into a visitor attraction had been abandoned.

‘Demand just wouldn’t be there,’ she told Fake Booze.

‘After all, if people want to look at old relics from a less enlightened era they can just go to a Decanter tasting.’