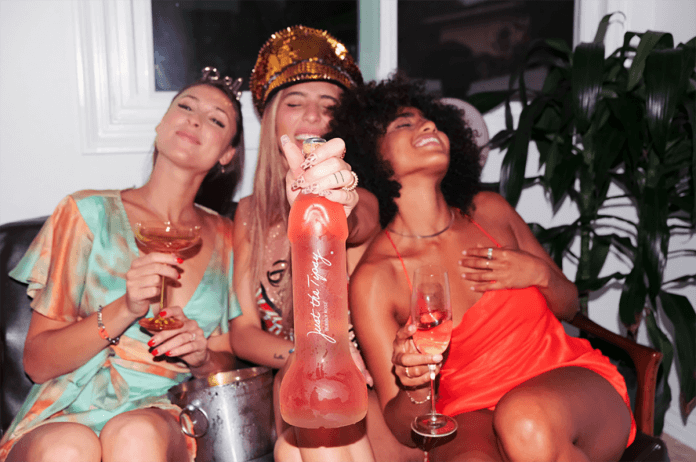 The success of a ‘bubbly rosé’ from Napa, packaged in a bottle shaped like a male member, has seen Champagne houses scrambling to rush out phallic-themed line extensions of their own.

The last few days have seen a plethora of new ‘Cham-penis’ products. Roederer have announced they are planning to bring out a limited edition ‘Cristale Coq’ range, packaged in a lubricated yellow ‘protective sheath.’

‘Cock bottles are really on the rise.’

Critics have expressed concerns that the new genital-themed trend is being ‘blown out of all proportion’ and is ‘a race to the bottom – almost literally’.

But specialist champagne marketer Mustafa Ouainque said this probably depended on whether you were a ‘glans half full or a glans half empty’ sort of person.

‘To be honest,’ he told Fake Booze, ‘bottling your prestige cuvée in a huge glass nob is no more vulgar than some of the other packaging out there.

‘And it’s still significantly better than Ace of Spades.’

Big – and getting bigger

‘Nobody is being shafted,’ he told Fake Booze. ‘The Champagne region has never been averse to introducing different styles – particularly if we think there’s money in it.

‘And in a difficult global market, drinks have to work with all the tools at their disposal.’

The BBC was hesitant to give exact figures, but said that over the last fortnight sales of the new style had ‘already surpassed ten years of zero dosage.’

‘The public love things that are fizzy, chock full of sugar and puerile,’ said Ouainque.

‘And once they’re introduced to champagne through bottles of cheap piss shaped like a wanger they’re bound to trade up to more serious and expensive expressions.

Some commentators, however, have said that they see the love affair with phallic bottles as a one-night stand, rather than a long-term relationship.

‘Typically there’s a lot of excitement at the start, a short burst of euphoria and then a long period of self-loathing when you tot up the cost and wonder why you bothered.