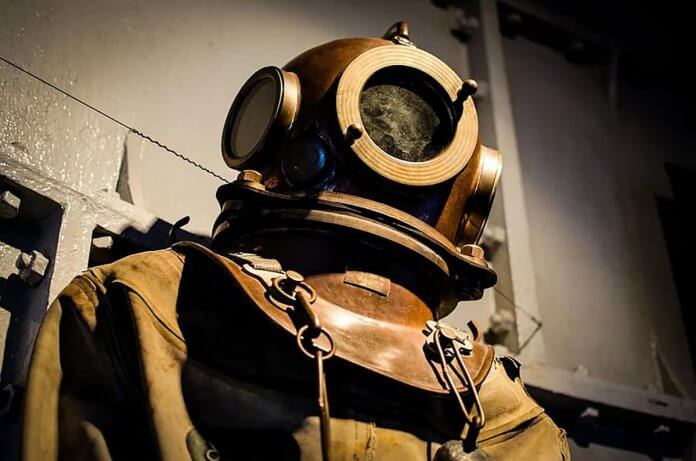 As pie and mash shops, whelk stalls and herring emporia prepare to open up in the People’s Republic of Brexitania, the government is urging caution, with stringent new measures for the hospitality industry.

As of next week, bars and restaurants will be free to open normally – provided staff all wear old-style diving suits. The government said this was to protect the public from hospitality workers, who were ‘innately more dangerous than the rest of the population’.

While controversial, a spokesman said they were simply ‘following the science. Or at least knee-jerk bigotry.’

The suits are being requisitioned from captured French fishing vessels and repurposed by friends of the government for a knockdown fee of £5 billion.

Health secretary Matt Halfcock described the new policy as ‘an intelligent, imaginative and, above all, lucrative response that is consistent with our strategy of laying the entire responsibility for Covid at the door of bars and restaurants.

‘Or any care home residents who haven’t died yet.’

Eat out or fuck off

Hospitality bodies, however, were quick to condemn the move.

‘Where on earth am I going to get a dozen diving suits in three days?’ said restaurateur Jammy Gulliver. ‘Those things are as dated and pointless as most of the cabinet.’

Service, he said, was bound to be impacted because it would take serving staff 20 minutes to walk from the kitchen to the diners and back.

‘That might be enough time for Boris Johnson to father another little bastard,’ he told Fake Booze.  ‘But at that rate we’ll be lucky to serve four people a night.

‘Unless they’re influencers, who don’t care how long it takes as long as it’s free.’

The government, however, maintained that the Diving Suit Solution was completely consistent with all its other policies, since it was slow, cumbersome and economically disastrous.

‘Stigmatising people unjustly is very much at the heart of what this government is all about,’ said Halfcock, ‘and we’ve had a great time so far giving bars and restaurants ridiculous hoops to jump through.

‘And I for one will really enjoy watching them try to jump through anything with those big heavy boots on.’

The Diving Suit Solution is expected to run in tandem with a Tweet Out to Help Out scheme launched last week by Chancellor Rishi Truthlack.

Under the scheme, anyone who books a restaurant and brags about it incessantly on multiple social media channels is eligible for a bonus third Covid jab.

‘People love showing off about their utterly unremarkable lives, and they love getting stuff for free, so we’re expecting record engagement,’ said a government spokesman.

The government admitted that there was ‘no medical benefit’ in giving anybody a third Covid jab, but said the chance to stick needles into bloggers was ‘too good to miss’.

‘Besides,’ concluded the spokesperson, ‘we’d rather waste it on a bit of pointless feel-good PR than let the foreigners have it.

‘After all, that’s what the Battle of Brexit was all about.’