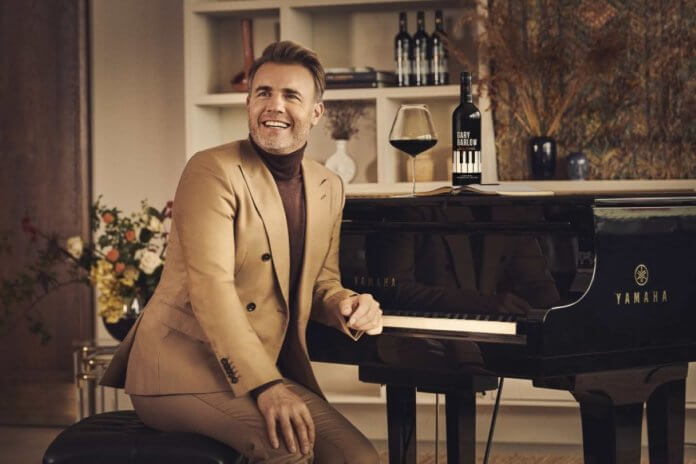 Gary Barlow – toothy songwriter behind the success of Take That – has launched a range of Spanish wines, just 24 hours after pulchritudinous pouter Angelina Jolie announced she was selling her stake in Miraval.

The Wine Police have said that there is ‘no official “one in one out” policy when it comes to disinterested cashing-in on booze brands’ and this week’s moves were ‘just a happy coincidence’.

Ms Jolie was approached by a number of parties to sell her stake in Miraval.

A leaked document shows prospective buyers to be ‘Mr B Pitt’, ‘The Bradster’, ‘Definitely not Brad Pitt in a false nose and glasses’ and a faceless multinational.

A made-up source said she ‘considered them all carefully before selling to the one that wasn’t her ex-husband.’

‘Critics have said that celebrities have no real connection to their drinks,’ said gossip reporter Holly Woods. ‘But they just show their affection in different ways.

‘Some prove their commitment by talking balls on a regular basis, while others really buy into the hard graft of vineyard work with a 15-minute photo shoot in the vines.

‘Angelina,’ she went on, was ‘proving the deep love she’s always had for her project by selling it’.

New owners, the Stoli Group, have said they have ‘big plans for the brand’, with rumours rife that they might be using Miraval to make the first super premium rosé vodka.

French wine journalist Michel Bettanomyces said that ending up as vodka would ‘probably be a step up for most Provence rosés – at least in terms of flavour.’

Gary Barlow, meanwhile, was excited by his new project.

‘I’ve had a growing interest in wine,’ he lied to the press, ‘ever since my agent approached me and suggested it was an easy way to make a bit of money without having to do very much.’

Putting a piano keyboard on the label was, he said, a legal requirement to remind everyone that he is a pianist not a winemaker and if the wine tastes crap it’s not his fault.

And I just can’t hide it

Fans have voiced their dismay that the wine range will be called Gary Barlow, rather than Take Vat, and also that he has ruled out a skin-contact white collaboration with Jason Orange.

But they are looking forward to his expansion with wines from Argentina, (Could it Be Malbec), Jerez (Relight My Fino) and the South of Italy (Back for Glut).

The two wines, made in the Costa Nomucho area of Spain are made from the indigenous Whocares and Cashingin grape varieties.

Barlow’s expert analysis is that they are ‘nice’, ‘like beer only without the bubbles’ and ‘different colours.’

Fake Booze’s sneak preview of them revealed aromas of cynicism and indifference with a top note of menopausal housewife.