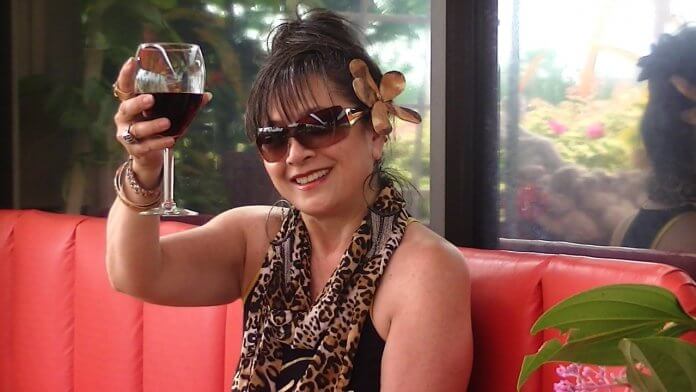 After ‘health and wellness’ and hard seltzers, the world’s drinkers are being warned to brace themselves for the next big craze: Ginfandel.

The cult brand has been breaking all kinds of sales records across the States, and describes itself as ‘a lifestyle combination of artisan spirit and the taste of California.’

Critics have been less kind, with one calling the gin/zin hybrid ‘a Franken-wine’s monster that’s equal parts industrial alcohol, cynicism and the dregs of the wine lake.’

Founder of the brand, Californian ‘ginfandelista’ Annette Gain, said the drink was the result of a change in her lifestyle during lockdown earlier this year.

‘Like couples everywhere, my husband and I like to share a bottle of wine on a Friday night,’ she told Fake Booze. ‘It helps us get over the relentless misery of our work life, and encourages our weekly half-hour drunken fumble.

‘But during lockdown I noticed my alcohol tolerance becoming akin to that of a Boston longshoreman. So I took to adding a few shots of overproof spirits to my Friday night tipple. And hey presto! ‘Ginfandel’ was born!’

Marketed as ‘the stylish way to obliteration’, Ginfandel has sold nearly two and a half million bottles in its first month of release thanks to a substantial Instagram and Twitter following majoring on the hashtag #iwanttoforget.

Red, white and, of course, blush versions are already available, with importers across the world scrabbling to get exclusive rights in their country.

‘Of course it tastes terrible,’ said Helmut Herr of German importers Kapfitz-Wehritt. ‘But you should not underestimate just how miserable everyone is at the moment. 90% of people need to get quickly and quietly ratted at least once a week, and if you can tap into that, you’re made.’

Gain is already working on her next project, ‘Rumpagne’.

Released in November it is being pitched as ‘the stylish way to cope with your family at Thanksgiving or Christmas’ with the hashtag #ihatemylife.