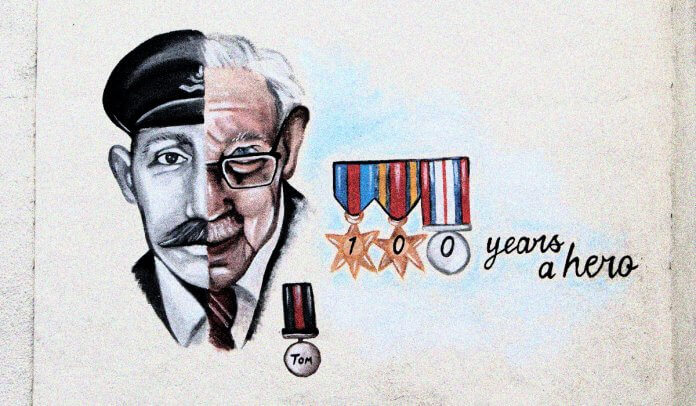 The drinks industry has been accused of ‘shamelessly cashing in’ on the memory of Captain Sir Tom Moore after a slew of product launches and line extensions were launched just days after his death.

The centenarian captured the imagination of the UK last year with his heroic ‘laps of his garden’ to raise money for the NHS.

Knighted for his efforts, Sir Tom passed away on Monday, since when the world’s drinks companies have rushed to launch, rename or repackage products in his honour.

Critics have said the industry is ‘cynically surfing a tide of goodwill just to make money’.

But the brand owners have defended themselves, saying they are actually ‘producing heartfelt tributes to surf a tide of goodwill just to make money.’

Diageo has created Captain Moore-gone rum, and adapted the slogans on its bottles of Johnnie Walker to ‘Keep Walking… for the NHS’.

LVMH is to launch Tom Perignon – a special Oenotheque of its top champagne with fruit from 100-year-old vines.

Pernod Ricard will add to its vodka range with an Absolut Legend extension, featuring a pair of ‘Captain Tom’ glasses on the label.

Bacardi said that the bats on its bottles would all have a ‘tasteful’ OBE pinned to their chests and be redrawn to do a ‘bat salute’.

‘Everyone loves Captain Tom. Just like everyone loves the great taste of our spiced rum and high quality whisky,’ said a Diageo spokesman. ‘The way he raised £30m for the NHS was amazing.

‘And if reprinting a few labels can do even half that for our balance sheet then we’ll be delighted.

‘While still being respectful of his memory and sorry about his death, obviously.’

However, as news of the line extensions and launches broke, the late Captain’s family accused the drinks industry of ‘rampant opportunism’, ‘naked greed’ and ‘tasteless commercialism’.