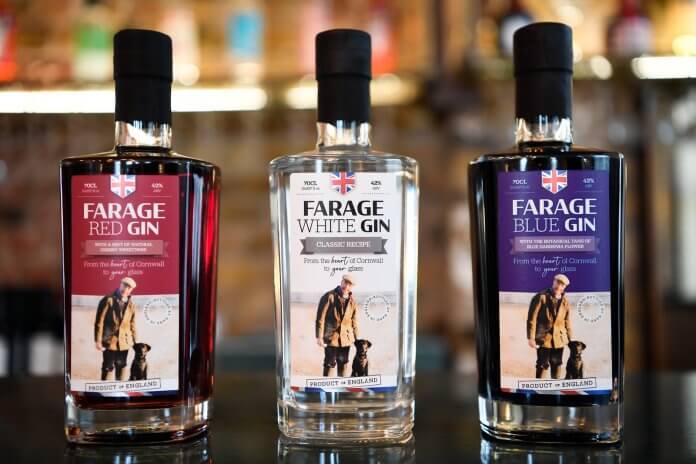 Nigel Farage has launched a range of overpriced, opportunistic gins which he says ‘perfectly capture the spirit of Britain as I think it should be’.

Putting the lab in label

The bottle features a picture of Farage in a rain jacket with his Labrador and is reckoned to be perfect for his audience.

‘There’s a group of people who really respond to plodding, greedy creatures who’ve always got their nose in the trough,’ said label designer Jay Pegg.

Putting the bollock into symbolic

Made in Cornwall by a family who lost their jobs as fishermen after Brexit, the gins are available in three colours – red, white and blue – and have been carefully chosen for their bone-headed symbolism.

The red gin represents both the florid jowls of furious gammons and the country’s debt-riddled finances which Farage helped to create by insisting the UK sever a lucrative trading relationship with its biggest market.

The white gin is a traditional ‘Loon-don Dry’ and mirrors the colour of the people who like to spend their spare time yelling at asylum seekers.

Putting the blue into blootered

Farage, however, is particularly proud of the blue version.

‘It’s the colour of the sea, which of course is where boats full of desperate women and children belong,’ he told Fake Booze. ‘But it’s also how everyone feels at the moment and the colour of the millions of people who won’t be able to heat their homes this winter thanks to my friend in the Kremlin.

‘So it works on many levels. Just like I don’t.’

European politicians have said they welcome the launch and that it was ‘good of Farage to create a range in the colours of the French flag’.

However, the drink has received a mixed welcome from gin experts.

Blogger and commentator Gin Marmoset described it as ‘a new low even by the standard of celebrity drinks launches’.

She agreed with Farage’s assertion that they ‘tasted of Brexit’ because they were ‘bitter, expensive and likely to induce nausea – much like the man himself’.

But uber-critic Frances Jobbinson said there was some logic to the new products.

‘The fact that he knows nothing about the subject matter has never stopped him from jumping on any passing bandwagon before,’ she told Fake Booze.

‘And given his obsession with living in the past, it’s probably also fitting that he’s about 15 years behind everybody else, too.’

Putting the fecked into perfect serve

A spokesman for Farage said that he had been a huge fan of gin because it was a ‘traditional British product, even though it was invented by the Dutch’ and had wanted to create his own version ‘ever since he looked at his bank balance and realised he was no longer coining it in as an MEP.’

According to Farage his gins are best served in a glass chilled with naked ambition, mixed 52/48 with amoral opportunism and garnished with out and out lies.

The first run has been bought up entirely by the UK Conservative party.

Click here to learn how to make your own craft gin in less than ten seconds; or here to read about Boris Johnson’s world-beating drinks range.