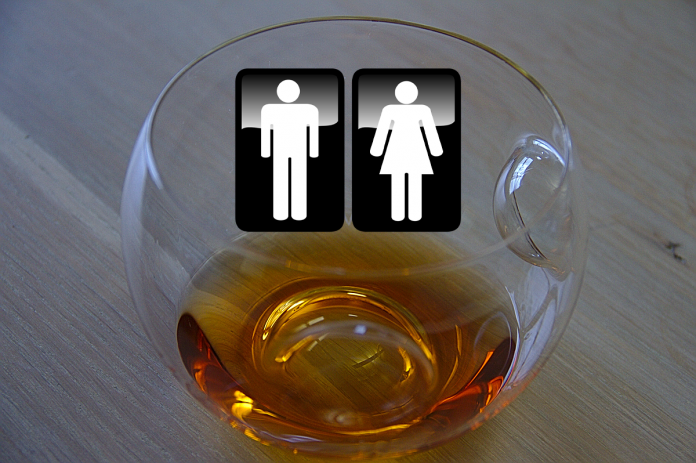 Glass giants Riddle have added a new range of ‘tasting commode’ glassware to their portfolio that experts say could ‘revolutionise the post tasting serve occasion’.

The company’s CEO, Jimmy Riddle, said the new range is ‘the perfect way to stay stylishly in your comfort zone – whatever the situation’ and will ‘help to preserve urinate dignity.’

‘Traditionally, glassware has been very much about putting wines and spirits into your body,’ said booze accoutrements specialist, Zalto Schott. ‘So Riddle’s move into the post-kidney space is a huge step.’

Stylishly made out of fully transparent glass, the company said its Pissoir range is ‘squat, sturdy and hard to knock over provided you look where you’re going.’

With its slogan of ‘Sip, Unzip, Let it Rip’ the Pissoir Pro is designed to be discreet enough for winemakers to hide under a desk or behind apparently non-existent bags of sugar, tartaric acid or flavourings in the winery.

Riddle says it is suitable for all kinds of cellar-inspired micturation, including  ‘tea, coffee, wine, coffee and coffee.’

Natural winemakers, however, are advised to exercise caution since the appearance following a heavy night out can be indistinguishable from old orange wine. As, indeed, can the flavour.

Though Riddle’s competitors have been caught short by the launch, business analyst, Ana Lyst, said the move was inevitable.

‘Partly because as a company they have a strong history of innovation.

‘But mainly because they have now made a glass for literally every drink on the planet.’

Currently, Riddle has 3,500 products in its portfolio, but launches had slowed of late to one a day.

So far there is only one product in the Pissoir range – the Pro Classique – but experts expect there to be a red and a white version – urinoir and uriblanc – on the market within the next few days.

However, Jimmy Riddle told Fake Booze they had no plans to launch a Sauvignon Blanc Pissoir, ‘since it tastes more or less the same coming out as it does going in.’

Gwyneth Paltrow has expressed an interest in marketing the new glass, branded as a holistic ‘circular drinking’ range called Own Your Pee.

A so-called ‘Gooper Scooper’ is also thought to be in the pipeline, though Fake Booze would like to stress that this is a rumour and we currently have nothing to go on.

Paltrow herself has described it as ‘a big job’, and stressed that they were ‘keen not to strike a bum note and come out with a bog standard product’.

‘This new Riddle launch might look like a radical departure,’ said Ana Lyst. ‘But really it’s amazing that none of these big glass companies have done something like this before.

‘After all, most of them have been taking the piss for years.’