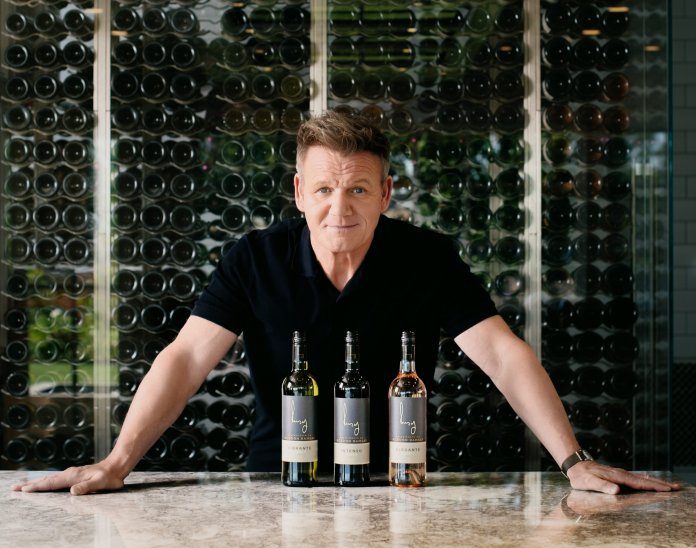 Craggy-faced TV curse-machine and occasional chef, Gordon Ramsay, has launched a range of Italian wines that, he says are ‘the dog’s b*******’.

Observers have welcomed the arrival of his ‘Italian Jobby’ trio as a ‘much needed addition to the world of wine after hardly any celebrity launches in 2021.’

Controversially, Ramsay has chosen to make his wines in Italy rather than France.

‘I really wanted to make what I wanted, where I wanted,’ he told Fake Booze. ‘And you can’t blend wines from different regions in France.

‘At least, not if you ignore the entire Vin de France category, which allows you to do precisely that.’

Italy, he said, fitted his personality better because it was ‘really chilled and laid back.’

The Italian Jobby trio consist of Intestino – a red made of 50% distillation-quality Montepulciano d’Abruzzo and Cabernet Swearvignon; Gigantisimo – a rosé that the chef describes as ‘pink but still fucking manly, all right?’ and the white Vibrato Bianco.

Gordon Ramsay was adamant from the start that his wine would fit with his glittering Michelin-starred heritage.

‘I’ve always pursued excellence my whole career, which is why I decided to team up with the guy behind Kylie’s rosé, Graham Norton’s Sauvignon Blanc and Gary Barlow’s sangria, before shipping it out for a tenner in Tesco’s,’ he said.

‘There’s a lot of pretentious crap talked about terroir,’ he told Fake Booze. ‘But these wines very much express something unique – my insatiable desire for self publicity.’

Ramsay said that his association with Italian flying winemaker Alfredo Springonioni was very much a 50/50 joint venture, with Springonioni supplying decades of winemaking expertise and overseeing harvesting, fermentation, ageing, blending and bottling, and Ramsay providing several hours of photoshoots and a signature for the label.

‘We split it half and half,’ said the chef. ‘Alfredo does the work and I take the credit.’